TRNSYS simulations for a solarthermal plant of a new district heating system in the German village Mengsberg.

The village Mengsberg consists of many listed frame houses which make energetic refurbishment difficult. The community wanted to become independend from fossil fuel imports and decided to build up a renewable heat supply. Because of the participation in the European Village Renewal Prize the project bioenergy village Mengsberg became even more attractive.

In 2012 started the idea of a renewable heat supply of the village and first informative meetings were organized. Viessmann provided a feasibility study based on biogas in 2013. After another year a cooperative (BEG Mengsberg eG) was founded and solarthermal energy as heat source was investigated.

Solites was ordered for TRNSYS simulations for the concept of a large-scale solar thermal plant with heat storage and supported the Viessmann und the BEG Mengsberg eG in their planning process.

In 2017 the contract of the BEG and Viessmann as general contractor for the realisation was signed and the operation of the solarbioenergy village Mengsberg started in 2018. 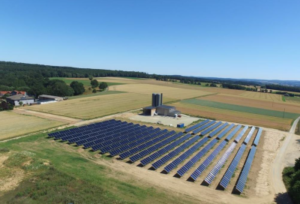