70% of the heating and domestic hot water boiling in the ‘Kaysieva Gradina’ district in Varna, Bulgaria, could be provided by solar thermal energy by applying the SDH technology. To all the residents of Varna this is a huge opportunity to switch to clean heating, to end without using fossil fuels and to get rid of the fine particulate matter in the air. It is also crucial for achieving independence from the fuel imports. This is the conclusion of a recent survey performed by the Institute for Zero Energy Buildings in Sofia, Bulgaria. What’s more important is that the same number is relevant to all the medium and big cities in Bulgaria.

Solar district heating (SDH) consist of thermal solar collectors that produce heat for heating and domestic hot water throughout the year. This kind of installations are already very popular in Europe, especially in Denmark. ‘Today some 110 district heating companies in the country connecting between 200 and 15 000 consumers use solar district heating.’ said Per Alex Sorensen, one of the veterans of the technology, president of the FlexEnergi cluster, and a consultant at PlanEnergi, Denmark. SDH systems could function even more efficiently in Bulgaria, given the intense sunshine in the South-European country. The return on investment for a SDH system would be approximately 10 years, IZEB experts say. Its maintenance is easy and inexpensive.

The survey carried out by IZEB covers 69 residential apartment blocks build by prefabricated panels (‘panel blocks’) with a total built-up area of 285 000 square meters, located in the ‘Kaiysieva Gradina’ district of Varna. There is no centralized district heating network in this area. The main source of domestic heat are local electric stoves and air conditioners. In order to maximize the effect of the solar district heating system, thermal insulation should be applied to the residential buildings. ‘Our calculations show that, when these ‘panel’ apartment buildings have sufficient thermal insulation, thehousehold energy consumption will drop down to 85 kWh per square meter per year.’ said Dimitar Paskalev, an architect, founder and head of the Institute for Zero Energy Buildings. 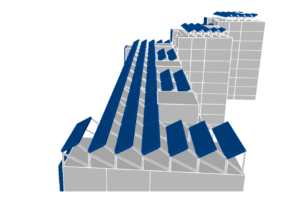 The heat output will reach 38 kWh/m²/a for the rooftop solar collectors and nearly 22 kWh/m²/a for the wall-mounted ones. Together, they will provide 60 kWh/m²/a. This means that district heating solar collectors can provide 70% of the annual heat consumption in the buildings. Heat energy could also be kept at seasonal storage systems placed udergroud, e.g. in the spaces between the buildings.

‘The typology of the multi-family residential appartment buildings built with pre-fabricated concrete panels is extremely popular in Bulgaria. Such type of buildings could be found both in big cities with large neighborhoods consisting of tens of panel blocks, and in smaller towns,’ said Dimitar Paskalev, head of IZEB.

At the moment Veolia Energy Varna, the district heating provider in the city, is evaluating the potential construction of a solar district heating system in Varna, the company announced. ‘We are exploring the possibilities for applying the SDHtechnology in Varna because we are trying to diversify the portfolio of energy sources we use – especially given the rising fuel prices we’re witnessing,’ said Lyubomir Kostov, Head of Customer Care and Development at Veolia Energy Varna.

The survey was initially announced during the first in Bulgaria training for design and construction of solar district systems. It took place during the ‘Black Seaside Days of Intelligent Energy’ in June 2017 at the Technical University Varna. It was organized by the Association of Bulgarian Black-Sea Municipalities and the Black-Sea Regional Energy Management Agency together with the Institute for Zero Energy Buildings, the National Association of Municipalities in Bulgaria, the Sofena Agency, the Technical University Varna and the Black Sea Research Energy Center.

The IZEB study of the potential of solar district heating in the ‘Kaysieva gradina’ district in Varna was carried out within the SDHp2m project (Solar District Heating … from Policy to Market) funded under the EU Horizon 2020 program.