Solar thermal is on the rise in German district heating networks

34 large solar thermal plants with a total capacity of 44 megawatts and a gross collector area of 62,700 square meters are currently integrated into district heating grids in Germany. The industry, which discussed its perspectives at the conference “Forum Solare Wärmenetze” in Stuttgart in June 2019, expects accelerated growth in the coming years and anticipates a fiftyfold market increase in the long term.

In 2019, additional 23 megawatts with a collector surface of 33,000 m2 are expected to be built. Germany’s district heating suppliers have discovered the sun, most of all the public utility company Stadtwerke Ludwigsburg-Kornwestheim (Baden-Württemberg), which is currently building the largest German solar thermal plant with 14,800 m2 collector area. So far, the Stadtwerke Senftenberg (Brandenburg) has kept the German record. Last year, Stadtwerke Senftenberg harvested 4,720 megawatt-hours for their district heating network from the 8,300 m2 of solar collectors.

For the next five years, Dirk Mangold, head of the Steinbeis Research Institute Solites, expects the number of plants to be roughly doubled to 70 large solar systems with a tripling of capacity to 140 MW. “This figure is calculated from ongoing projects and concrete feasibility studies, whereby we have calculated the respective probability of realization as a factor”, explained Mangold at the conference. Compared to the official national targets, as set out in the Federal Government’s energy efficiency strategy for the building sector, the current very positive market development can only be regarded as a start. The scientist emphasized: “By 2050, the Federal Government would like to massively increase the contribution of solar thermal energy to district heating. With a share of 15 percent, this corresponds to 12 terawatt-hours per year. This requires an installed capacity of around 21 gigawatts, i.e. a collector area of around 30 million square meters. We therefore need an additional 1 million square meters per year. That means that the roll-out has to increase by a factor of 50 compared to this year!” 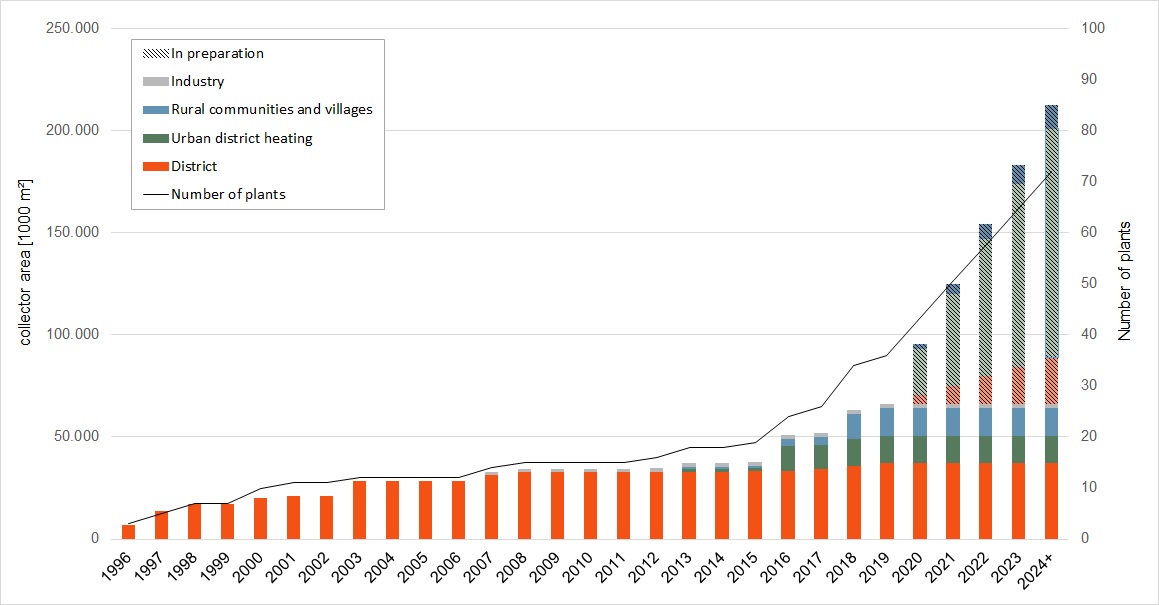 A factsheet with more information on the current market status of solar heating in Germany can be found here.  (German language).