This author has not yet filled in any details.
So far Patrick Geiger has created 62 blog entries. 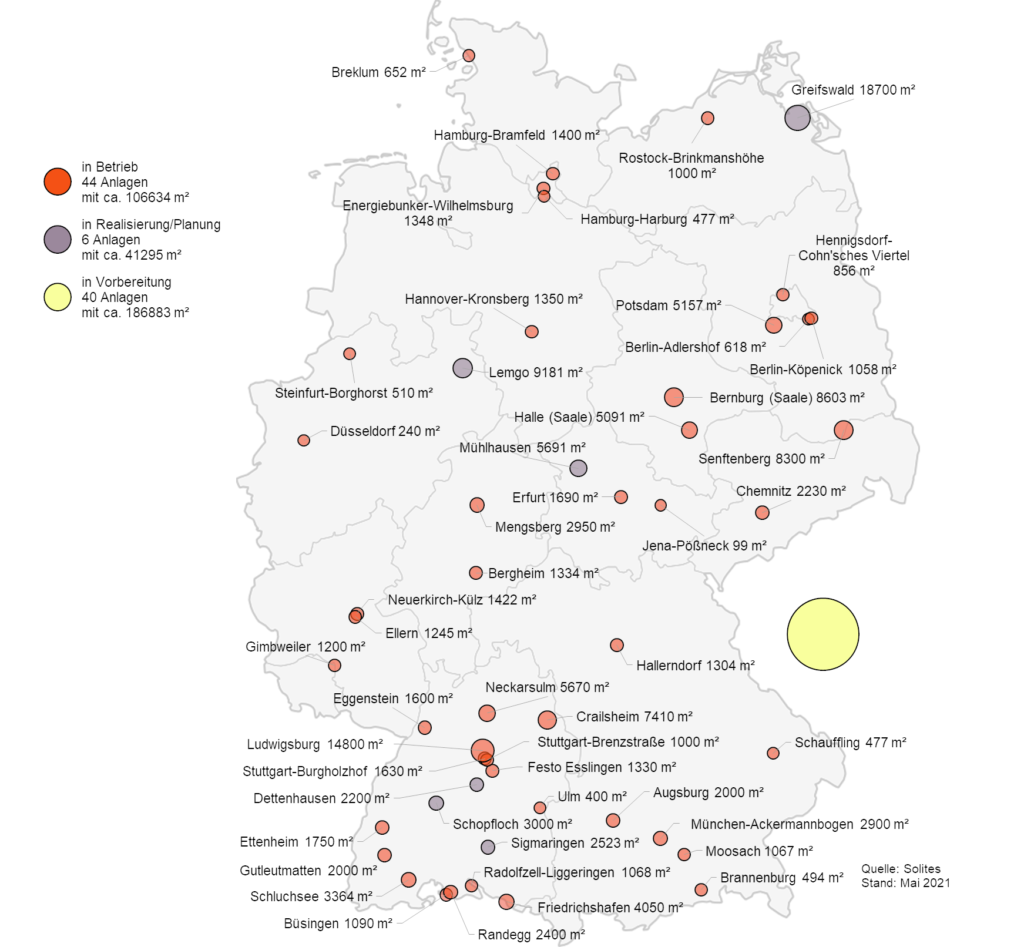 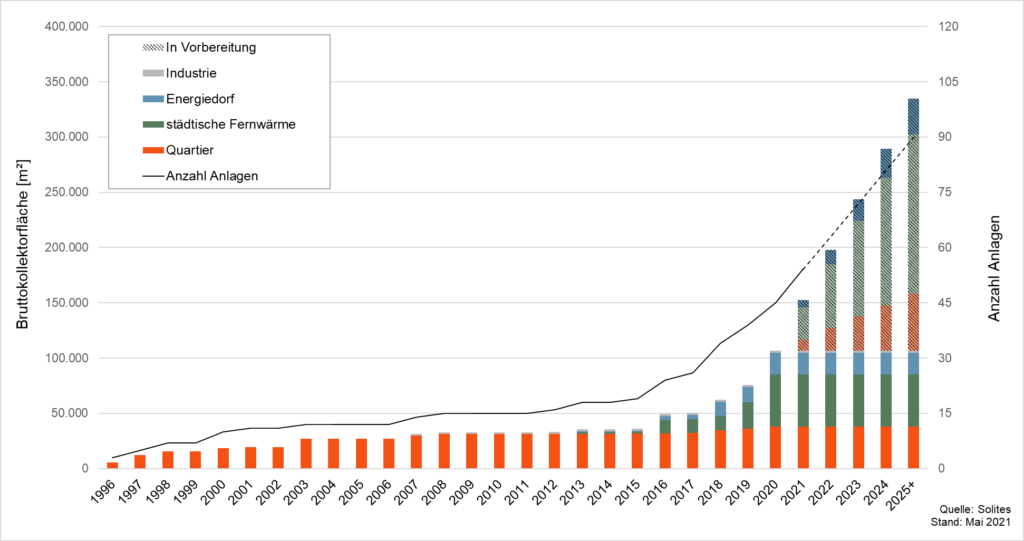 Spotlight on SDH potential in Germany, the Netherlands and Austria

Solar thermal will have a key role to play in growing western Europe’s solar district heating markets over the next decades.

Dutch, German and Austrian SDH experts updated attendees during a workshop organized by IEA SHC research platform Task 55 on the current situation and the potential in their respective markets. For example, the collector area installed in Germany, they said, could triple from about 100,000 m2 used in 41 systems today to more than 300,000 m2 by 2025 (see the chart above). As announced in December 2020, the country’s soon-to-be biggest SDH plant will have 13 MWth, a good deal more than the 10 MWth installation in Ludwigsburg (10 MWth). This new plant will be put up in Greifswald, in northeast Germany, and is scheduled for completion by 2022.

Luuk Beurskens, of TNO, Netherlands’ organization for applied scientific research, presented the initiative for a Solar Thermal Roadmap (“Aanzet tot Routekaart Zonnewarmte”). The authors of the 32-page report looked at what experts had to say about the solar thermal market in the Netherlands, and what actions need to be taken for a strong growth in the years ahead. The Dutch building sector alone could potentially see its solar capacity grow from 1.2 PJ in 2019 to 35 PJ in 2050. And adding seasonal heat storage could raise the country’s solar potential to as much as 54 PJ, which would be enough to meet 26 % of the total demand for thermal energy by 2050. The assessment shows important potential contributions to be provided by individual residential systems (34.3 PJ) and new solar district heating networks (18.8 PJ).

Hamid Aghaie, of the Austrian Institute of Technology (AIT), spoke about a possible evolution of Austria’s DH sector and the role of solar thermal over the next decade. Currently, 60 % of the country’s district heat is generated by CHP plants, though heat pumps and solar thermal are expected to increase their share in the market.

Using open-source dispatch and the investment model Balmorel, AIT estimated what proportion of Austria’s DH capacity solar thermal systems could provide by 2030. The results show that the share of solar heat in DH networks could increase by a factor of 60, from essentially zero in 2018 to 3.8 %, in 10 years. At the same time, demand for district heat would grow from 23 to 28 TWh.

As early as November 2020, the national association Austria Solar put a new decision-making tool called Quick Check BIOSOL on its website. In essence, the program helps plant owners to find out whether their district heating networks could benefit from solar heat integration.

At a German-language webinar following the upload, Austria Solar’s Managing Director Roger Hackstock explained how the tool works. It requires only a couple of basic system parameters to determine whether solar collectors can supply as much energy in summer as the biomass or fossil fuel boilers grid operators have in place today.

According to March 2018 data, 1,546 of Austria’s 2,108 biomass plants used for heating are also run in summer despite some drawbacks. For one, the devices produce soot, which hampers efficiency and increases wood chip consumption. Switching to solar thermal can solve these issues, reduce operation cost, and lower air pollution. But instead of immediately turning to detailed – and costly – feasibility studies on solar district heating sites and systems, stakeholders can now use Quick Check BIOSOL for a first, free analysis of whether a retrofit is worth the effort. The tool was developed in partnership with several Austrian experts and was sponsored by solar thermal system supplier Gasokol.

The tool utilises only a dozen parameters, including buffer tank volume, annual district heating demand, usable roof surface, grid temperature in summer, boiler type (biomass or fossil) and type of auxiliary heating (heat pump, waste heat or CHP system). Aside from that, the tool will automatically fill in some values, for example, the average collector yield. Almost immediately after entering the parameters, a note pops up, indicating a system’s potential for solar heat integration. This means the tool shows how much collector area is needed to replace a boiler partly or entirely in summer and how much land the collectors require if roof space is limited. In addition, Quick Check BIOSOL provides recommendations e.g. on how to reduce grid temperatures and more.

You can find a recording of the webinar and Hackstock’s presentation at:  www.solarwaerme.at
Austria Solar’s Quick Check Biosol: www.solarwaerme.at/biosol-quickcheck
Source and full article: solarthermalworld.org
Photo: Solid

The Chinese parabolic trough collector manufacturer Inner Mongolia XuChen Energy has successfully operated a huge solar district heating plant since 2016 in a village near Baotou in Inner Mongolia, an autonomous region of China.

The installation in Baotou consists of two fields of parabolic trough collectors, a 22,000 m2 rooftop field on XuChen’s factory hall next to the company’s headquarters and a 71,000 m2 system put up at ground level. The 93,000 m2 (65 MWth) SDH plant is the world’s second-largest after Denmark’s Silkeborg (110 MWth) installation but the biggest using concentrating collectors. It provides 500,000 m2 of residential buildings, buildings in a neighbouring industrial zone and a shopping mall with solar heat.

The 93,000 m2 solar plant is part of the government’s green heat policy to improve air quality in China’s northern provinces and phase out coal boilers. This policy is part of the overall trend to improve social living conditions and provide affordable housing which is summarized under the slogan “livelihood”- a term created by the Chinese government. Wang confirmed that the installation of the solar plant in Baotou is the first livelihood project introducing solar space heating to the region. ‘The government has completely taken over the RMB 0.55 billion in capital costs for the solar field, including the storage tank and the newly built heat network,’ Wang explained in an interview with solarthermalworld.org. This 100 % public subsidy was what prompted XuCheng’s investment in a collector factory in the same city. XuChen, founded in spring 2016, also invested Renminbi (RMB) 1.05 billion, i.e., USD 154.7 million, in putting up headquarters as well as a 50,000 m2 factory for parabolic trough collectors in Baotou’s green industrial park.

Solar heat transported to nearby heat consumers by truck

Wang said that he has observed an increase in solar heat demand from China’s northern provinces. He added that surplus heat generated in summer, when none of the buildings connected to the SDH system require space heating, is transported by truck to nearby consumers, including hotels, swimming pools and spas. As China’s green heat policy requires the phase-out of coal boilers and because heat pumps rack up high electricity bills, purchasing solar heat from Baobou’s SDH plant is an economically viable option for those requiring large amounts of heat all year round.

Another huge solar district heating system is currently being built by XuChen in Han Dan, in the north of China. According to Wang, this plant will provide heat to a new all-weather, four season ecotourism vacation and leisure park. Due to the green heat policy of the government the construction of the leisure park would not have been possible without a source of clean energy for heating, in this case provided by SDH.

Find what you need in one click
X
Go to Top